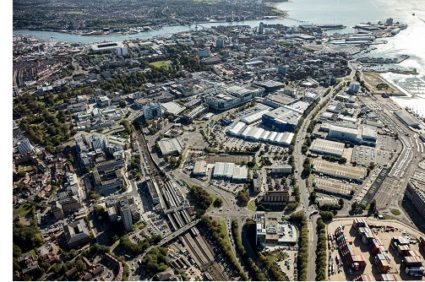 The landscape of Southampton could change rapidly  in the future as “ambitious” plans to completely transform the city centre have been unveiled. Southhampton will be detailing these plans at our upcoming event.

The area between Southampton Central train station and the waterfront is set to undergo a major overhaul after city bosses have announced their commitment to redevelop the so-called Mayflower Quarter.

The exact boundaries of the quarter are yet to be confirmed, but civic chiefs said it does include the area from the train station to the Mayflower Park – including the site opposite to Ikea and currently occupied by Leisure World.

Homes, shops, offices and leisure attractions could be built at the sites but detailed plans are yet to be drawn up.

Southampton City Council said a master planning team will be appointed in January next year and will be asked to prepare a masterplan for the Mayflower Quarter up to 2040.

The preparation of the masterplan is expected to take up to 12 months, completing in December 2020 to coincide with the culmination of Mayflower 400 celebrations.

The city council confirmed that the Mayflower Park, the Royal Pier and the derelict Toys R Us site will also be part of the Mayflower Quarter.

Cllr Christopher Hammond, leader of Southampton City Council, said: “The regeneration of this key area will showcase a modern, vibrant city to visitors and residents from the UK and beyond. It will provide much-needed homes, create new jobs and entice businesses to make Southampton their home. As part of our Green City commitment, there will be a sustainable transport vision underpinning and connecting the whole area.”

The news comes as earlier this month the authorities unveiled a number of projects including park and rides, new cycle lanes and hubs where people will be able to hire electric vehicles, pick up their shopping or buy a coffee as part of the schemes that could be given the go-ahead if the city council will receive a share of a £1.2bn grant from central government.

Sandeep Sesodia, director of the Hampshire Chamber of Commerce, said this is a landmark moment for Southampton.

“This hugely ambitious regeneration scheme will further bolster what is already an exceptionally strong local economy”, he added.

The city council said the 84 hectare area part of the Mayflower Quarter is one of the largest city centre regeneration opportunities in the country.

The overhaul has been welcomed by Go!Southampton, the Business Improvement District (BID) for the city centre.

Its chairman Tim Keeping said: “This announcement will help put Southampton on the international map not just as a port city but as a destination city. Along with the major improvements in internet connectivity already announced, the planned development will act as a catalyst to attract high skilled knowledge-based employment to the city and provide homes for new and existing businesses, as well as residents.”

City bosses announced their commitment to the scheme at the South Coast Commercial Property Show held at the Ageas Bowl yesterday.

As reported, last month the city council unveiled proposals for a £27m office block, 275 flats, new restaurants, cafes and shops at the former Toys R Us site in Western Esplanade.

A promenade will also link the train station to the Mayflower Park.

Cllr Dan Fitzhenry, opposition leader at the city council, said the plans for the Mayflower Quarter are an exciting opportunity for the city. “The key now is that the council do everything they can to continue to grow the city and encourage more investment across Southampton to create the city that we all want to see.

These include nearly 40,000 sq ft of office space and more than 11,000 sq ft of retail space as well as hundreds of new flats, a new hotel and a public square facing the station.