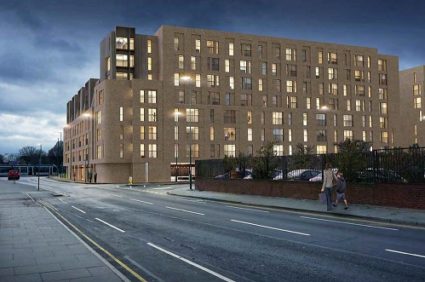 A £50m development in Nottingham has been unlocked as the project is approved. The city centre development, being brought forward by CERT Property (Sheriff Way Nottingham Ltd), is set to continue the transformation around Nottingham Train Station with the city boasting a number of major schemes in the area.

CERT Property (Sheriff Way Nottingham Ltd), who’re set to speak at the Nottinghamshire Development Plans Conference in March, will create over 400 student beds and 149 apartments set for the PRS market. Designs showcase two buildings ranging between four and eight storeys in height – with the western side housing the planned student accommodation ideal for the thriving University city.

The other, on the east, would be targeted at the private-rented sector and the apartments would be made up of 59 two-bed units and 75 one-bed apartments with a total of 15 studios.

Local Labour Cllr Michael Edwards welcomed the scheme saying: “I’m optimistic about the potential for it, because we’re looking for more accommodation for young people starting out in the world of work, and for students as well. Our universities do very well, and they are attracting young people for a quality education. We want to see that accommodation provided where there are good transport links.”

He added: “A lot of real effort has been put into this, in making it a design that works well, and involving community representative, and talking about its value and what it’s going to do. We’ve been pleased with the way that’s been done. We also want to maximise the opportunity for something which helps the nearby Midway Shopping Centre, which is doing very well. It’s one of the only shopping centres of its kind which hasn’t got any vacant spaces.”

The scheme is situated in a prime location, in an area which is boosting a variety of development projects and potential investment opportunities itself – which will be discussed by Nottingham City Council and the Nottinghamshire Development Plans Conference in March.

Paul Seddon, Director for Planning and Regeneration at Nottingham City Council, will also be speaking at the Nottinghamshire Development Plans Conference and he’ll be sharing details on the other schemes happening in the area. These include the new Broadmarsh bus station and shopping centre, a new student block on Waterway Street West and two further developments near the Hicking Building. These are alongside the new Nottingham City College campus and new development by Sladen Estates which will see HMRC take up shop in Nottingham for one of their regional offices.

The Council are set to announce their decision at a planning meeting on the 16th January 2019.

Click here to register for the Nottinghamshire Development Plans Conference