The 240-acre Salford Crescent masterplan has now been narrowed to four parties which include partnerships between some of the biggest players in the region and is now looking for a development partner.

The companies which have been shortlisted are: Bruntwood with Capital & Centric; Peel with Urban Splash; English Cities Fund, made up of Muse Developments, L&G and Homes England; and Robertson. The preferred development partner is due to be selected by the end of the year.

The University of Salford’s existing campus, areas around the Crescent, Peel Park, and Frederic Road North is covered by much of the 240-acre site.

The University’s estate extends north and south of The Crescent, taking in the listed elements of the Musuem & Art Gallery, to Salford Crescent station and includes green spaces at the Meadows, Peel Park and the David Lewis Sports Ground.

It was last year when this masterplan was announced, and the search for a private sector partner was launched by Salford City Council at MIPIM in March 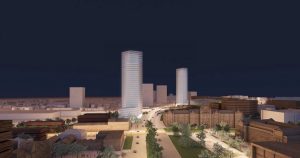 The council and university is being advised by CBRE, while architect 5plus created the masterplan for the site, which splits development into five areas; Adelphi, The Crescent, Peel Park, a Health Village, and Innovation District. This includes a wide range of buildings; residential, student accommodation, university education blocks, incubation space, retail and leisure, and improvements around existing assets such as the Salford Museum & Art Gallery.

At the tender launch in Cannes, the senior director of CBRE, Iain Jenkinson said the partner could either be a single developer or a consortium, with the council “not looking to be overly prescriptive” in its approach, although he added: “We’d implore partners not to come with a large design team”.

It comes as a little surprise that Brutwood’s place is on the shortlist given its specialism in developments partnering with universities and councils, as see on schemes such as the recent partnership with Liverpool Knowledge Quarter and Manchester Oxford Road Corridor. Its partnership with Capital & Centric brings variety to the bid; the developer has worked on Salford schemes since its early years, delivering projects such as the Foundry in partnership with the city council.

The work in Salford by the English Cities Fund is prolific; currently 10 years into the extensive Salford Central masterplan, regenerating 50 acres of the city to deliver projects such as projects along Chapel Street and New Bailey.

In the meantime, Peel is behind the 200-acre MediaCityUK at Salford Quays, and has extensive long-running ties to the area as an owner of the Ship Canal. Urban Splash has already partnered with the developer at another of its major sites, Wirral Waters, as Urban Splash makes a major push into its modular brand, HoUSe.

Major privately-owned Scottish infrastructure and construction group, Robertson has had designs on growth in the North West for some time. Hires to its regional office include several ex-Laing O’Rourke directors, a contractor popular on several of Manchester’s more prominent projects such as St Peter’s Square, Manchester Airport and Manchester Central Library.