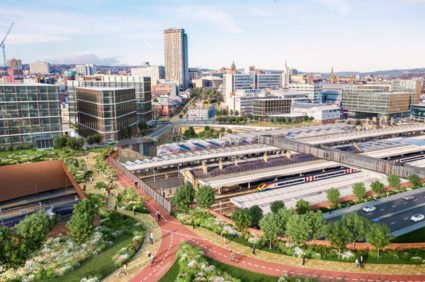 The hugely ambitious project would see the closure of Park Square roundabout and Sheaf Street – the dual carriageway that runs in front of the station – would swap places with the tram route that runs behind.

A huge, landscaped pedestrian bridge would link Park Hill with Howard Street and the multi-storey car park on Turner Street would be demolished and moved further away.

It would be replaced by an office block – one of up to 12 planned in the ‘Sheffield Valley’ zone, including four outside the station, employing up to 3,000 people. Up to 1,000 homes – flats and houses – could also be built.

The total cost of the 20-year scheme is estimated at £1.5bn, dwarfing the £480m Heart of the City II development. All of this will be discussed in detail at our Sheffield Development Plans Event.

Mazher Iqbal, cabinet member for business and development, said the plan was to maximise the economic potential of the area and make the most of HS2.

“This is the biggest, most ambitious and most expensive development project Sheffield has seen.

“This is about making the most of HS2 and Northern Powerhouse Rail and unlocking private sector development to bring in businesses and jobs.

“It will transform the Sheaf Valley and visitors’ arrival at the station, join Park HIll with the city, connect the station with Heart of the City II and create an entire new quarter for Sheffield.”

The new tram route would run from Fitzalan Square, along Pond Street, stop outside the station and continue along Suffolk Road to Granville Square.

The bus station on Pond Street would be reduced in size to make room for the tram tracks and offices on stilts potentially built on top.

rk Square roundabout and Sheaf Street would become a park and link into the Grey to Green scheme at Victoria Quays, Castlegate and West Bar.

Coun Iqbal said the council would co-ordinate the project. Funding could come from several organisations including the city council, HS2, SYPTE, Transport for the North, Network Rail, Sheffield City Region and the Department for Transport. But the bulk of the costs – up to £1bn – would be from the private sector, which would build the offices, restaurants, bars and potentially a hotel.

The masterplan will now go out for public consultation.

The idea stems from plans for HS2 trains to stop at Midland Station on a loop off the mainline which were recently given the green light by the government.

Alongside HS2, ‘Northern Powerhouse Rail’ is being planned by Transport for the North to transform connectivity between Northern cities.

There are also plans to improve local connections between Sheffield and nearby towns under the Sheffield City Region Integrated Rail Plan.

A city council report states: ‘These investments have the potential to not just transform the city’s connectivity but also the economy of the North…the area around Midland station is currently in need of regeneration and has a large amount of unrealised development potential.

‘While improvements to the station buildings and new public realm, which were completed in 2002, still provide a very high quality arrival point, there remain several undeveloped plots in the immediate vicinity, as well as traffic congestion, conflicts between taxis and private cars and poor air quality.’

Under the plans the ‘Q park’ would move to the Wren-DFS site on nearby St Mary’s Road.

Officials say it would be no more than a five-minute walk and the proposals promote the use of more sustainable modes of travel including train, tram, walking and cycling – the station’s bicycle hub would also be expanded.

There would be a new, sheltered, taxi rank next to the station, but the taxi ‘stacking’ area would be moved ‘slightly further out’ improving access for drop-offs and people with mobility needs.

The area between St Mary’s Road, Queens Road and Sheaf Gardens, currently home to businesses including a Pure Gym, would be a new residential centre for up to 700 homes, with a further 300 spread throughout the area.

Coun Iqbal added: “This is the concept. It will be broken down into individual projects and each one will have its own funding. The council’s role is to co-ordinate it and take care of the public realm and placemaking.”

On the new route for the inner relief road – Sheaf Street – the council report states: ‘The proposals would improve traffic flows and reduce congestion at Park Square and in front of Midland Station. The move creates new public spaces in front of the station that can be pedestrianised and improves access for walking and cycling.’