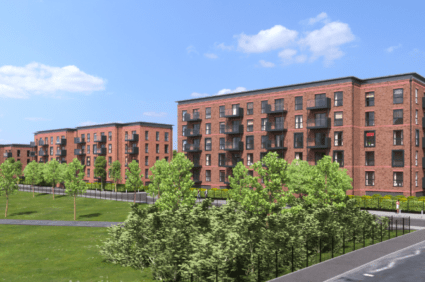 The scheme comprises a mix of one, two and three bedroom units built across 4.7 acres and divided between six blocks located either side of the existing Church of Ascension. The development further expands Simple Life’s existing portfolio of over 2,000 properties across the country.

Both Sigma Capital and Countryside are involved in the first ever virtual Housing & Build to Rent Conference next month, details of which can be found here >

The project has been named Empyrean, inspired by astronomer William Crabtree who made the area his home in the 1600s, Empyrean translates as the highest heaven.

Simple Life selected this location because of the huge surge of employment activity Salford has recently enjoyed with many new businesses choosing to relocate to the city, creating demand for quality places for people to live.

Matt Townson, development director from Sigma said: “We’re excited about this striking new development, which is located in the up-and-coming Broughton area, just a stone’s throw from Manchester’s Deansgate and Victoria train station. The site offers customers the privacy of their own space, with stunning views of the city skyline or Green Grosvenor Park, with the added bonus of being close to the bustle of Manchester and Salford city centre.

“The apartments are a great offering for people relocating to the city, they come fully furnished and have been designed for a variety of people including lone-occupiers, families or sharers, each having double sized rooms with their own bath or shower room and a large open plan kitchen, diner and living space.”

Gordon Innes, managing director, Partnerships Manchester & Cheshire East, Countryside, commented: “The transformation of New Broughton over the last decade has been huge. By working alongside our partners, we’ve created a desirable neighbourhood through a mix of tenures and home types, which in turn has attracted further investment and resulted in the vibrant community we see today. We are delighted to be delivering new apartments in the area for Sigma Capital, its private rental model will contribute to the area’s popularity with those wanting the best of being close to the city centre but with the benefits of Salford’s green space and local amenities.”

Located close to the River Irwell the Empyrean site has been built on a pre-cast concrete deck to raise the blocks as flood protection. It forms part of the much larger Lower Broughton neighbourhood which has been significantly regenerated. With £500m worth of redevelopment, the area has been one of the largest and most challenging regeneration projects in the UK, with over 3,500 mixed-tenure homes and a full range of community facilities and services including shops, leisure, employment, education and training. Sigma has also played a part in the regeneration of the area having built 66 houses in 2015 and 54 houses in 2017 in the Lower Broughton area.

The extensive regeneration programme has significantly improved the quality and choice of the residential offering in the area and has created a neighbourhood combining existing residents, as well as attracting those from outside the area.

Simple Life has an ambitious Corporate Social Responsibility (CSR) programme, and as part of this it has supported local school River View Primary with £13,000 of funding over the last two years, which has been used to provide a new reading greenhouse in the playground and the renovation of its pond area, which allows pupils to learn more about nature, whilst actually experiencing it.

Simple Life is also committed to a number of wider initiatives, providing customers with branded shopping bags and reusable branded flasks to lower their carbon footprints. Pets are allowed in Simple Life properties and the Empyrean site will benefit from a number of car charging points, as well as a communal outdoor garden space exclusive to residents, which will include benches and BBQ areas.