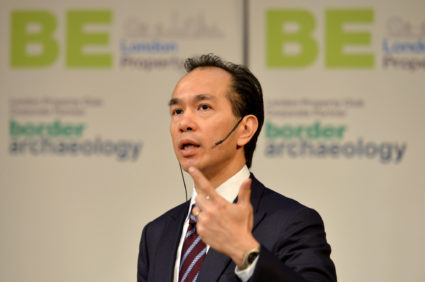 Olympia is an icon of West London, a major exhibition centre which opened its doors in 1886 and has played host to a raft of world class events ever since. Yoo Capital is leading a consortium of investors who are investing in the site to deliver a £1bn transformation project.

Lloyd Lee, Development Director for Yoo Capital, revealed to our London Property Club audience how they did all the due diligence before the start of the project back in April 2017.

He said to the firms working on the project: “We’re going to expect all 92 of you to work on the design, planning, all the leasing, the technicals, the financing and the construction cost and contracts at the same time.”

Opening the area back to the public and ensuring that the local community were listened to and allowed to provide feedback on the development, with 6000 local residents consulted prior to planning and monthly community events. Yoo Capital are also looking to give back to local business, Lee explained: “We’re including 60,000 sq ft of incubator space for new businesses.”

The area is also being pedestrianised. According to Lee the centre gets “70,000 lorry movements a year”, and in response, the developer is investing £70m in putting that logistical traffic underground.

Olympia London is a historic, landmark building that Yoo Capital are investing to preserve the past, but also bring a future to an underutilised area, and with their bold plans, the future looks incredibly bright.