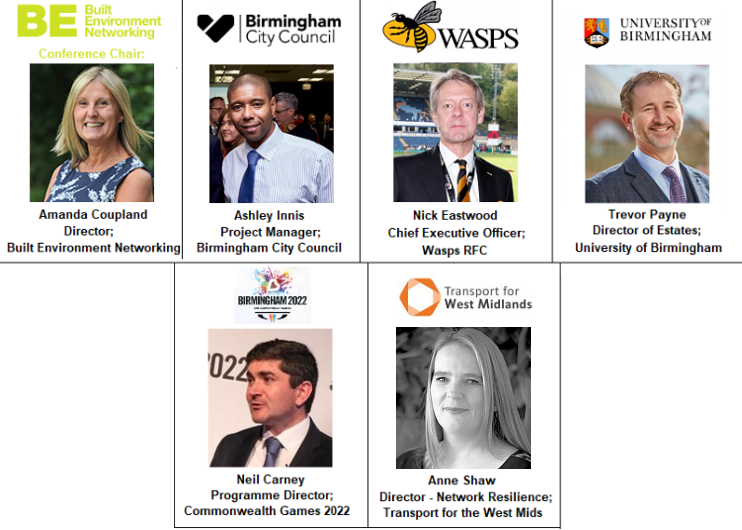 Hundreds of construction and property professionals will join us in Birmingham to hear about the major estate expansion plans of major Universities and developments unlocked through sporting success across the Midlands. Alongside hours of networking over 150 professionals will join us to hear from the leading University within the West Midlands – as well as huge projects set to happen due to the arrival of the Commonwealth Games in 2022 and a new state-of-the-art training ground for Wasps.

The University of Birmingham have asked to speak at the event to launch their new framework which will support their £700m capital program – with information set to be revealed exclusively at the event.

A unique opportunity to spend quality time after the event with the speakers. Take discussions about projects and schemes, procurement opportunities and networking with decision makers into a more relaxed and open setting. The evening meal includes a formal discussion around key regional topics in the industry – accompanied by good food, wine and excellent company. Those attending dinner include:

Sport continues to grow within the UK – whether its attendance and participation numbers or major growth across revenue streams including sponsorship and TV rights. This, along with the arrival of the Commonwealth Games and other major competitions, is seeing the need to expand stadiums, create new sporting venues and build new technologically advanced centres and training venues to gain an advantage against the opposition. The huge developments like this will be the focus of our next event in Birmingham as we gather those who’re putting forward new plans to speak about their vision for their estates and stadia. Speakers include:

We expect to be in a position to announce additional speakers shortly.

Enhance the benefits of attending the event by connecting with numerous brands from across the region. We’ve got several opportunities which will enable you to get exactly what you want – whether it be access to the speakers, onstage visibility, mass brand awareness or more.

We’re excited to have some exceptional speakers in Birmingham for this event which has attracted some of the biggest companies from across the region to attend. Some of those include: